We’re home. (You probably guessed.) In fact, we’ve been home for a week. (Sorry, I forgot to tell you.) And I’ve yet to tie up the loose ends and post the final entry to this blog. (Slack eh?)

Well, we ended our Alaskan adventure in that country’s northern-most outpost: Fairbanks – once a rough-and-ready goldrush town, now the region’s Golden Heart City. Fairbanks is just a couple of hundred kms from the Arctic Circle. In summertime (like now) it’s still twilight at 1am in the morning – and darkness lasts barely three hours. During Alaska’s frigid winter, of course, when temperatures drop to 40-below (or worse), it’s daylight that’s in short-supply. But that doesn’t stop the Fairbankers from having fun. Their far-north town is Start-Line for the Iditarod 1000-mile dog-sled race. It’s also Ground Zero for viewing the weirdly wonderful Aurora Borealis in the northern night skies.

We didn’t experience any auroras, regrettably. But we did sample a slice of Fairbank-life aboard a lovely big paddle-steamer, Riverboat Discovery … going ashore in the rain to tour a traditional Athabascan Indian village … eyeballing a restored steam-dredge … and panning for gold (again) in the hope of a lucky strike!

By this stage, it was all over bar the shouting. We caught a southbound flight (via Seattle) to Vancouver: the magnificent City of Glass … celebrated a noisy Mad Midlife Farewell Dinner at the ‘Dockside Restaurant’ on Granville Island … crawled into our huge beds for the last time in North America … and then dragged bags and bodies back to the airport for our 14-hour Air New Zealand flight home to Godzone.

Alaska? It’s totally amazing! So you’ve gotta add it to your ‘bucket-list’. We’ve had a BALL, we truly have! And we’ll never forget our lovely long weeks in these vast wild regions … 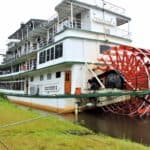 The Aurora Borealis – which we didn’t see! (Not our photo, obviously.)

PEOPLE-NEWS: One lucky-last quacky yellow duck has left the nest …

P.S. If you’d like to read earlier chapters in this Alaskan Blog, just click on ‘PREVIOUS’ or ‘OLDER POSTS’ – either at the start or finish of this entry. If you want to receive future Mad Midlife Travel Blogs in your INBOX, just sign-up (top-right) for your free Email Subscription!