Earlier this week, as we trekked further ‘North to Alaska’, we coached along the scenically scenic Scenic Byway for a day and a night in Anchorage – founded in 1914 as a work-camp for the Alaska Railroad, then devastated by a 1964 earthquake, but quickly recovering to become home for almost half of Alaska’s residents. This popular city is ringed by mountains and waterways, and loved for its great outdoors – especially Turnagain Arm, named thus by Captain Cook, and billed as one of the most beautiful stretches of water in North America.

Next morning, you would’ve found us relaxing aboard yet another train: the luxurious domed railcars of the McKinley Explorer, which took us, eventually, into magnificent Denali National Park. For many adventurers, Denali is the highlight of their Alaskan adventure – 24,500 untamed square kilometres. (That’s five times more landmass than the entire Auckland Region!) And yesterday was a biggie: a fully-narrated bus-ride aboard (I kid you not) a genuine, cramped, old-fashioned school-bus – the famous Tundra Wilderness Tour – transporting us deep into this remarkable natural wonderland.

This was probably our best chance of spotting some of the region’s hard-to-find wildlife – curvy-horned sheep traversing rugged cliffs far in the distance (too far off for a decent pic) … golden eagles patrolling the ridges … moose, caribou and grizzly bears, foraging in upland meadows … and even a beaver or three, building dams in the streams that crisscross the park. Most of us just missed spotting a beaver, but we all managed to tick the boxes for moose, caribou and bears.

This wilderness tour was also our only chance to eyeball an icy monster, Mt Denali (previously known as Mt McKinley), soaring high above the surrounding plain. Mt Denali is North America’s highest peak (known to native Athabascans as the Great One), fully twice the height of Mt Cook – and, on most days (as for most tourists) it hides its massive snow-smothered bulk behind clouds. But our Kiwi luck was in – and our cameras were on hand to record the magic moment.

A moose on the loose! 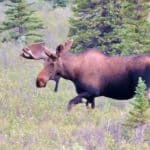 Just look at those antlers! 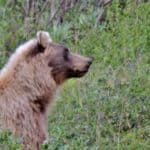 Mt McKinley in all its glory!

Don’t be fooled – those things are heavy!

The work of beavers – but where are the beavers?

PEOPLE-NEWS: Three more world-famous quacky yellow ducks have been given out …

STILL TO COME: We take up paddle-steaming and gold-panning in Alaska’s most northern city, Fairbanks, wondering all the time if we might see the Aurora Borealis this close to the Arctic Circle (just a couple of hundred km away). Stay tuned … and find out!