Have you read the book, ‘The Bronze Horseman’? Well, guess what? We saw him today, up there on his rearing stallion – Tsar Peter the Great, without whom there would be no St Petersburg, and without which we would not be here as tourists.

The city he built has been dubbed the Venice of the North for its graceful waterways. The Neva River runs widely through the middle of town, with canals going in all directions, and St Petersburglars (or whatever the locals are called) tell you proudly they’ve got more than 500 bridges.

We didn’t get to count them today, but we did get to explore a bit more of what was once the pride of the Romanovs. Somehow, St Pete managed to escape total destruction by the Communists and the Nazis, and these grand leftovers from the tsarist era are still either pretty much intact or brilliantly restored.

We kicked off our full-day tour with photo-stops at a number of historical and political landmarks, including the old steam battleship Aurora where the Bolsheviks announced their revolution … St Isaac’s Cathedral with its great gold dome … and my personal favourite: the colourful fantasy-cathedral of Our-Saviour-on-the-Spilt-Blood (built on the site where Alexander II was assassinated).

Then, after lunching (appropriately) on local wine and stroganoff, we headed for the Hermitage, where some three million priceless works of art are displayed in what was once the Tsar’s 1000-room Winter Palace. Our Russian girl-guide, Elena, informed us that if we spent just one minute on each item in this art museum it would still take us eight years to get around – so, instead, she gave us a whirlwind tour of the best-of-the-best.

Wow! What a fantastic afternoon – even for those in our group (like me and Mrs Cooney) who usually get museumed-out after 15 minutes – and even if our collective Kiwi feet were aching (and smelling) by the time we got back on the coach.

St Petersburg has exceeded our expectations …and it’s safe to say that our Mad Midlifers will never feel the same about Russia!

PEOPLE NEWS: The clock is ticking and the pressure’s on, but people are still doing silly things and awards are still being given out:

* The ‘AWOL Award‘ goes to Henry – who got a little confused yesterday and found himself Absent Without Leave, in a different group altogether, standing alongside total strangers, and listening with interest to a guide he’d never seen before.

* The ‘Lost & Found Award‘ goes to Yvonne and Daryl – who, in an absent-minded senior moment, left their cardigans (both of them) on our coach back in Helsinki. They’ve been in tears ever since, deeply saddened and grieving their loss. But, this morning, their clever tour leader turned up with the missing items (which had been handed in by the coach driver). Phew!

TOMORROW: A stunningly-preserved walled capital and medieval jewel awaits us in Estonia. So stay tuned …

P.S. If you want to leave a message for someone in our group, just click on ‘COMMENTS’ (or ‘NO COMMENTS’) under the title for the day’s blog, and type away! Make sure you say who it’s for and who it’s from – and keep it brief. And don’t worry: we’ll make sure they get these messages. 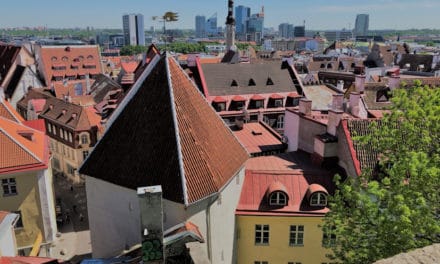