We docked this morning in what some regard as the most beautiful city in the world.

St Petersburg was built by Tsar Peter the Great in 1703 as Russia’s ‘Window to the West’ … designated Russia’s capital in 1712 … had its name changed to Petrograd, then Leningrad, following the 1917 communist revolution … and finally, in 1991, when the Soviet Union upended, returned to its original name: St Petersburg. 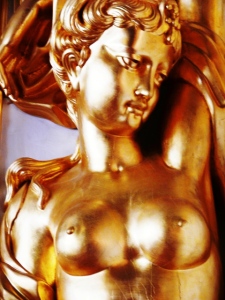 These days Russia’s largest port is a mix of magnificent extremes: drab and unkempt in places, yet breathtakingly gorgeous in others. In this latter category are the fabulous cathedrals, palaces and monuments that await you here – and we spent an unforgettable Wednesday eye-balling a couple of them.

First up, a 45-minute drive took us from the port to Tsarskoye Selo  (the Tsar’s Village). Peter the Great had this estate and its masterpiece-palace built for his wife Catherine in 1710. During WW2 it suffered severe damage (and lots of its treasures were stolen), but it has since been gloriously restored. 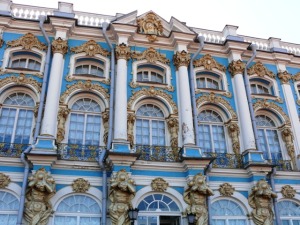 And, I’ve gotta tell you: ‘gloriously’ is no exaggeration! The blue-white-gold exterior of Catherine’s Palace is glorious. And the gold-embossed interior, with its Great Hall and the world-famous Amber Room, is double-glorious! 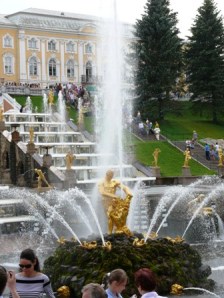 Then, this afternoon after lunch, we drove through the countryside to the gardens and fountains of Peterhof – featuring the Grand Cascade and Samson’s Fountain. Built way back in the 1730s, this amazing bit of engineering shoots a 20-metre-high vertical jet of water into the air (without the aid of pumps). 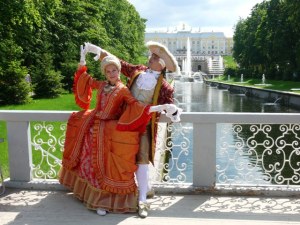 By this stage, St Petersburg had got well-and-truly under our skin. But wait – there was more …

This evening, we Mad Kiwi Midlifers left the ship and headed out again – for a Russian Folklore Extravaganza, where a troop of colourful Cossack dancers demonstrated their remarkable athletic and musical skills. 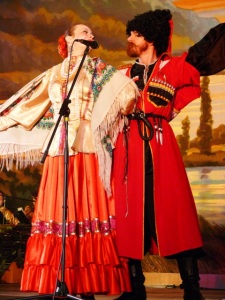 Was a great day had by all? You bet!

PEOPLE NEWS: Another much-coveted Midlife Madness Award was given out this morning:

* The ‘Hog-Snort-Rupert Award‘ went to Derek – who, while having a ‘nana-nap’ on the coach yesterday, gave us a serious fright by letting rip with a dangerously-loud snore … a snort, actually … in fact, almost a roar! (Derek apologised, and has promised to get counselling once he’s back in Auckland.)

TOMORROW: We’ll enjoy more of St Petersburg’s treasures – a multi-domed fantasy church and the staggeringly wealthy Hermitage Museum. So stay on this channel …

P.S. If you want to leave a message for someone in our group, just click on ‘COMMENTS’ (or ‘NO COMMENTS’) under the title for the day’s blog, and type away! Make sure you say who it’s for and who it’s from – and keep it brief. And don’t worry: we’ll make sure they get these messages. Also, if you want a better look at our route map and some of the photos here, just click on them and they’ll enlarge – magic!