Wow! This all-too-short Mad Midlife romp through La Belle France has gone by far too fast. And today, our second-to-last-day in this truly lovely country, is going by even faster. Fasten your seatbelts, folks, because we’re currently enjoying a high-speed, 975km ride on a TGV bullet-train … due to arrive in Paris less than six hours from now!

We’ve been packing it in, these past few days, seeing as much as we can of stunning Provence with its Côte d’Azur (azure coast) … its balmy Mediterranean climate … its magic seascapes, celebrity playgrounds and medieval villages. Forgive me if I just list the highlights:

THURSDAY: We cried “Au revoir!” to the Amadeus Symphony in Lyon, and travelled south by coach, stopping first in the picturesque village of St Remy de Provence – its Roman interior encircled by what’s left of a 14th century wall. This is where Van Gogh painted Starry Night, Nostradamus was born and Dr Albert Schweitzer was held prisoner. Our second stop, in the afternoon, was the magnificent hilltop village of Les Baux de Provence – with dinner and bed that night at another beautifully restored old villa, in woodlands outside the lively feudal village of Noves.

FRIDAY: Our sightseeing kicked off in an impressive Cistercian abbey, the Notre-Dame de Senanque, snuggled into a nearby valley and surrounded (in season) by vast fields of purple lavender. Next on our to-do list was Gordes, the most beautiful hilltop village in all of France, with its white-stone houses, its labyrinth of ‘calades’ (narrow cobblestone streets), and its famous-name artists. Last but not least was the picturesque village of Isle sur La Sorgue – built on islands in the middle of the Sorgue River, and famous for its huge waterwheels and its untold antiques shops.

SATURDAY: We grabbed a morning stop in the quaint French town of Aix en Provence (aix pronounced like our letter x) – birthplace of painter Paul Cezanne – to wander down the Cours Mirabeau (a wide avenue built on top of the town’s medieval ramparts) and ogle the leafy boulevards, gurgling fountains, public squares and weekend markets. Later, we found ourselves in Cannes (film-festival capital of the world) and, finally, the resort city of Nice, with its spectacular coastline … its elegant palm-laced Promenade des Anglais … and its Old Town mansions painted pink, ochre, tangerine and lemon.

SUNDAY: Continuing along the French Riviera, we took a ziggy-zaggy road up the cliff-face to Eze – an isolated village that clings to a rocky spike towering above the sea. There, we huffed-&-puffed up the narrow cobblestone streets, browsed the dinky little shops, and soaked up the heart-stopping views. One final visit awaited us that afternoon: the glitzy harbour of Monte Carlo in the tiny principality of Monaco – famous for its super yachts, Formula One racing and Casino. We checked out the royal palace, wandered the royal gardens, and followed a little of the Grand Prix Circuit in our fast-revving coach.

For our last leisurely evening in Nice, we roamed the crowded Promenade, dined at local bistros, and witnessed the sobering memorial to those killed by that mad truck-driver a couple of months ago. 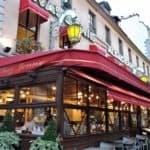 SADLY, ALL GOOD THINGS COME TO AN END … and our Mad Midlife adventure in France is almost over. We’ll sit down tonight to a Farewell Dinner at Paris’ famous Chez Jenny restaurant – and tomorrow we’ll part company. Those staying on in Europe will head in different directions … and the rest of us will transfer to Charles de Gaulle Airport for our midday departure on Singapore Airlines.

Is everybody happy? You bet your life we are!

PEOPLE-NEWS: Feathers are flying and quackers are quacking as the last three Yellow Duck are handed out …

P.S. If you’d like to read earlier chapters in this Travel Blog, just click on ‘PREVIOUS’ or ‘OLDER POSTS’ – either at the start or finish of this entry. If you want to receive future Mad Midlife Travel Blogs in your INBOX, just sign-up (top-right) for your free Email Subscription!