Believe it or not, this blog entry is coming to you from the windowsill in our 3rd-floor room in the 400-year-old Wittlesbach Hotel in the Bavarian town of Oberammergau. We got here late this afternoon after a delightfully scenic drive from Salzburg – initially through flat spic-&-span farmland, with crops and hay paddocks stretching to the horizon, then through an increasingly alpine landscape, with rugged peaks, mirror-lakes and even some snow in the distance.

I’m writing this from our windowsill (i) because there’s no room on the tiny desk, and (ii) because the view out the window of this fairytale township with its surrounding mountains and frescoed houses and church spires with bells ringing is too good to miss.

I’m having trouble remembering everything we’ve done since I last talked with you – travelling, as we have, from the Czech Republic to Austria to Germany. But bear with me while I try my hardest to bring you up-to-date.

PRAGUE: We Kiwis spent the weekend (in facts nearly three days) in this gorgeous Czech capital – and, without exaggeration, it captured our hearts. Prague has all the ingredients that a Grande Olde City requires: a castle (complete with towers, turrets and the changing-of-the-guard) … cathedrals (both Gothic and Baroque) … a riot of grand palaces … a town hall (adorned with an antique clock) … crowded pedestrian-only squares and quaint shop-filled alleyways … a (flooded) river running through the middle (the Moldaut) … picturesque bridges … plus so much more – and, frankly, we fell in love.

Look, I could go on forever about Prague, but you’ve really got to experience it for yourself. So if you’ve got nothing better to do next weekend, catch a ride to the Czech Republic. You won’t be disappointed!

CESKE BUDEJOVICE: We didn’t stay here, but we did make a coffee-stop here on Monday. Although it wasn’t really a coffee-stop. This Czech town is famous for its Budweis Brewery and the Budweiser beer that’s known throughout the world – and we Kiwis got to sample the product and see how they do it.

Speaking of thirst … we have, in the past few days, moved from a flood-zone to a heat-wave-zone – stunning, hot days with temperatures climbing even higher in some of the walled-in town squares we’ve been walking around. In fact, for the record, what we’ve lost in cruising-time on the Rhine and Danube, we’ve more than made up for in near-perfect weather.

SALZBURG: We reached this musical city late-yesterday, after a leisurely in the picturesque village of Mondsee – location of the Abbey and the wedding scene in The Sound of Music.

Salzburg is where the genius Mozart (1756-91) came from, and you can hear year-round performances of his famous compositions. But the tunes we Kiwis more quickly recognised came from that beloved 1964 Hollywood extravaganza. And it was hardly surprising that certain scenes in this town – the Mirabell Gardens, the Pferdeschwemme fountain, Nonnberg Convent and the Residenzplatz – looked kind-of familiar, because these hills are still alive with the Sound of Music, and this is where Maria (Julie Andrews) and the von Trapp children sang their little hearts out.

Last night we got to do the same, at The Sound of Salzburg Dinner & Show … with Janet (not to mention any names) starting a new career in show-biz!

This morning, after snoring in Achat Plaza Zum Hirschen Hotel (go on – have a go at pronouncing it!), we explored the charming old centre of Salzburg, with its Great Festival Hall, the exquisite green-domed Domplatz, St Peter’s Abbey, and lively Getreidegasse Lane – the delightful medieval street where Wolfgang Amadeus Mozart was born.

OBERAMMERGAU: Leaving Salzburg this afternoon, we enjoyed a scenic trek from Austria into Bavaria (southern Germany). Pristine alpine scenery flashed past on both sides as we got nearer to this mountain village – known for its quaint frescoed houses, wood carvings, Christmas shops (Christkindlmarkts), and its world-famous once-a-decade Passion Play.

But more on this magical place later … 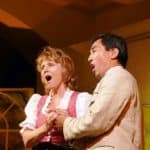 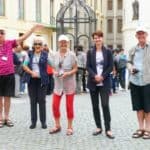 PEOPLE NEWS: It’s been pretty quiet on the quacky-yellow-duck-front, but a couple of late entries have caught the eye of our judges:

TOMORROW: We have a morning at leisure in Oberammergau, then take to Germany’s highways again in search of Heidelberg. Our Mad Midlife Adventure is nearing its end, but don’t give up on us yet …

LONDON: TO VISIT THE QUEEN

Eat Your Heart Out …