IF YOU’RE STRUGGLING TO KEEP TRACK of where we are, where we’ve been, and where we’re going next, don’t panic – because WE’RE struggling, too! The past few days have gone by so fast it’s not funny. But right now, in this the final week of our Grand Baltic Adventure, we’re in the NORWEGIAN FJORDS … surrounded by serene waterways, forested islands, plunging cliffs, snow-splattered peaks and colourful towns … in one of the most environmentally untouched, scenically gorgeous regions on the planet.

And I think I speak for all of our Mad Midlifers when I say, “We’ve kept the best till last!”

Take Tuesday, for example, when we woke up in EIDFJORD …

Dwarfed by sheer mountains and white-water rivers, Eidfjord is often rated the most beautiful small town in this part of Norway. Located on a narrow neck of land between the Hardangerfjord and the Eidfjordvatnet (a large, deep lake), and ringed by charming farmlets perched on mountain ledges, it’s simply magnificent.

There’s been a settlement in these parts forever. Stone Age hunters used to follow the migrating reindeer to put steaks on their table – and apparently (although we never laid eyes on either a Stone Age hunter or a reindeer) large herds still inhabit the grassy slopes and mountain ledges around here.

Our coach took us through town, past ever-present, always ugly, trolls (they love them in this part of the world!), and along the fjord to a lookout photo-stop at Bu. Then, on our way to the village of Ulvik, we drove over the new Hardanger Bridge – one of the longest suspension bridges in the world.

The small community of Ulvik (650 in all) is famous for its fruit-growing, especially apples. And our next port-of-call was the Hardanger Juice & Cider Factory (located on Lekve Farm) where we were shown around the small, immaculate factory after first sampling the yummy results: apple juice, apple cider and apple brandy. 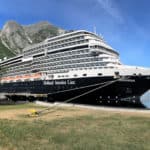 THEN, EARLY YESTERDAY, THE KONINGSDAM cruised ever-so-gracefully into ALESUND (pronounced ‘Orlisin’). Known far and wide for its beautiful Art Nouveau architecture – the turrets, spires and ornamentation which give the town its distinctive character – Alesund (population 41,000) is like something out of a fairytale. It was destroyed by a devastating fire in 1904 (which left 10,000 people homeless) … then totally rebuilt across two islands at the mouth of Stor Fjord.

Our tour took us from the pier through the centre of town with its amazing buildings and their fascinating façades. At the Sunnmore Folk Museum, we eyeballed a collection of very old ships (including an 18-metre-long Viking row-boat, dated 690AD, found smashed up and buried in a nearby marshy bog) … plus a collection of very old houses (their earthen roofs sprouting grass which, back in the day, goats used to graze on).

We then drove up to Mount Aksla for stunning aerial views of Alesund and the surrounding ‘skerries’ (rocky outcrops and islands). 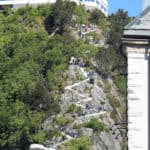 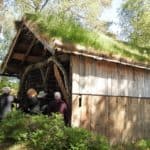 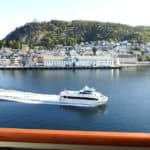 COMING UP: We’re in Geirangerfjord, one of Norway’s most impressive sights, especially when seen from 1500 metres up a dizzy-making hairpin-bendy mountain-road! So, put on your snow-shoes, fasten your seatbelts, and stand by …

PEOPLE-NEWS: This group simply can’t get enough of our chubby Pink Pigs are now flying out the door/gate … 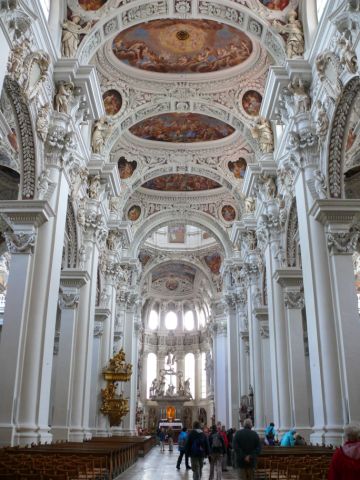