We woke up yesterday in our oh-so-comfy cabins to find the Nieuw Amsterdam approaching the second most famous (and most populated) city in France, after Paris. Marseilles, over the centuries, was ransacked by sundry French kings and foreign armies … suffered gangsters, plagues, religious bigotry and its own Bastille-storming … featured in movies, such as ‘The French Connection’ … and gave birth to La Marseillaise: a popular song composed during the French Revolution that later became France’s national hymn (and, later still, was sung by me and my classmates in primary school).

For our morning tour, however, we abandoned Marseilles in favour of nearby Aix en Provence (aix pronounced like our letter x) – a quaint French town that used to be the region’s capital, and features leafy boulevards, gurgling fountains, public squares lined with 500-year-old mansions, plus thermal springs that once impressed the Romans (who first settled there) and still flow warmly today. We enjoyed a wander along the Cours Mirabeau (a wide avenue built on top of the town’s medieval ramparts) with photo-ops galore: aristocratic façades, wrought-iron balconies, finely carved doorways, and an impressive cathedral or two. Then, reluctantly, we dragged ourselves away and took a scenic route back to Marseille.

Today, as we ate our cornflakes and brushed our teeth … the ship dropped anchor out from the glitzy harbour of Monte Carlo in the tiny principality of Monaco – famous for its super yachts, its Formula One race-cars, and the nightlife centred on its famous Casino.

The wind had gotten up, the sea had gotten choppy, and tendering ashore in the lifeboats became a long, tricky process. But, once on terra-firma, we parked bums on seats for a coach-ride the followed the Grand Prix Circuit, then headed along the Middle Corniche (the ziggy-zaggy road up the cliff-face) to Eze – a remarkable, isolated village that clings like an eagle’s nest to a rocky spike towering above the sea. Leaving the coach, we huffed and puffed up the narrow cobblestone streets, browsed in the dinky little shops, and sampled some local sweets and nougat.

Then, driving by way of the lower Corniche (the coastal road along the spectacular French Riviera), we reached the resort city of Nice, with its beautiful palm-laced Promenade des Anglais. There we meandered through the Old Town area, along Cours Saleya, with its charming flower-markets and tall houses, and lunched on local bakery delights while sitting on the sea-wall overlooking the popular pebbly beach.

En route back to Monte Carlo, we followed the winding Cote d’Azur (azure coast) past other beautiful spots – like the gorgeous sheltered harbour of Villefranche (pronounced ‘vee-fronsh’) which boasts a medieval garrison with massive ramparts and gates, and clusters of yellow, pink and red brick houses packed against the hill.

A fantastic day in this truly lovely part of the Med? You bet! And, to wrap it all up, we braved strong winds and an even choppier sea as we tendered back to the ship – where another four-course gourmet dinner awaited us, plus big comfy beds with the sheets turned back and chocolates on our pillows!

TOMORROW: Have you read books about Tuscany, watched movies about Tuscany, seen photos of Tuscany? Well, eat your heart out, folks, because we’re GOING THERE, to sample it for ourselves! So stay tuned … 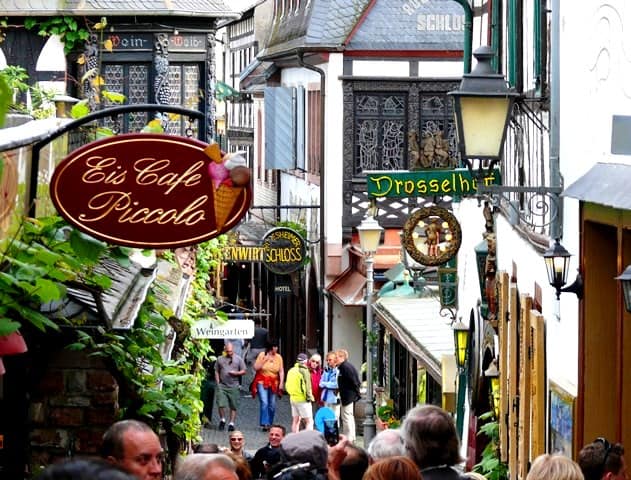