Have you read the book, ‘The Bronze Horseman’? Well, guess what? We saw him yesterday, up there on his rearing stallion – Tsar Peter the Great, without whom there would be no St Petersburg, and without which we would not be here as tourists.

This grand city was built by the Tsar in 1703 as Russia’s ‘Window to the West’ … designated that country’s new capital in 1712 … then had its name changed to Petrograd, and later Leningrad, following the 1917 communist revolution … and finally, in 1991, when the Soviet Union upended, returned to its original name: St Petersburg.

Confused? Well, imagine how the St Petersburglars (or whatever they’re called) must feel!

These days Russia’s largest port is a mix of magnificent extremes: gray, drab and unkempt in places, yet breathtakingly gorgeous in others. In this latter category are the fabulous monuments, museums, cathedrals and palaces that await you here – and we’ve just spent two unforgettable days eye-balling some of them.

SATURDAY: Our first taste of Russia was the grumpy, unsmiling bureaucracy we encountered as we filed in long queues through Custom’s Clearance. But that impression was quickly changed by our cheerful tour guide, who was soon introducing us to St Petersburg’s historical and architectural landmarks – including Vasilievsky Island, (with magnificent views of the Neva River and the countless canals that crisscross the city) … St Isaac’s Cathedral with its great gold dome … and my personal favourite: the colourful fantasy-cathedral of Our-Saviour-on-the-Spilt-Blood (built on the site where Alexander II was assassinated).

Later, after lunching on local dishes, we headed for the Hermitage, where some three million priceless works of art are displayed in what was once the Tsar’s 1000-room Winter Palace. Apparently, if you spend just one minute on each item in this art museum it would still take you eight years to get around – but we managed to cram the best-of-the-best into a busy hour and a half.

It was a fantastic afternoon – even for those in our group (like me and Mrs Cooney) who usually get museumed-out after 15 minutes – and even if our collective Kiwi feet were aching (and smelling) by the time we got back on the coach.

Finally, we returned to the ship for a quick freshen-up and a bite to eat, before being delivered to a posh city theatre for a Russian Folklore Extravaganza – where a Navy band plus a troop of colourful Cossack dancers entertained the troops.

Needless to say, it was nice, after such a long day, to crawl into our big turned-down beds (complimentary chocolates placed on each pillow) for some welcome shut-eye …

SUNDAY: Another big day … another friendly, fun-loving guide … and another chance to explore what was once the pride of the Romanovs. Somehow,St Petersburg managed to escape the architectural vandalism that occurred during Stalin’s era, plus total destruction during the awful 900-day siege by the Nazis – and many stunning leftovers from the Tsarist era are still pretty much intact.

First up today, a 45-minute drive took us from the port to Tsarskoye Selo (the Tsar’s Village). Peter the Great had this estate and its masterpiece-palace built for his wife Catherine in 1710. During WW2 it suffered severe damage (and lots of its treasures were stolen), but it has since been gloriously restored.

And, I’ve gotta tell you: ‘gloriously’ is no exaggeration! The blue-white-gold exterior of Catherine’s Palace is glorious. And the gold-embossed interior, with its Great Hall and the world-famous Amber Room, is even glorious-er!

Next up, after another local-style lunch, we drove through the countryside to the gardens and fountains of Peterhof – featuring the Grand Cascade and Samson’s Fountain. This amazing bit of 1730’s engineering shoots a 20-metre-high vertical jet of water into the air (without the aid of pumps).

Oh boy! St Petersburg has got under our skin and exceeded our expectations …and it’s safe to say that our Mad Midlifers will never feel the same about Russia!

People have been rushing to claim the little yellow rubber-duckies that are given out each morning, and the St Petersburglist is a long one:

The Suppository Award was won by Roy – who, while passing through a turnstile at the Hermitage, managed to get one of the chrome-plated prongs stuck up the leg of his shorts. Ouch!

The Pick-Pocket Award went to Kevin – who had a panicky few moments in the tourist crowds when he thought his wallet had been stolen. He frantically checked all of his pockets without success – then discovered the missing wallet in his other hand!

The Early-Bird Award was claimed by Elaine – who, afraid of being late, got herself and her husband to our group’s on-ship meeting point in plenty of time. It was only after waiting … and waiting … and wondering where everyone else was that Elaine discovered they were a full hour early.

The AWOL Award was won by Evan – who was spotted marching off in totally the wrong direction during our walking tour at Peterhof. If I (John) hadn’t called him back, Evan would probably still be marching – en route, perhaps, to a longer holiday in some Siberian gulag?

Finally, the Ship-Ahoy Award was won by Alison – who was totally convinced that what she could see on the distant St Petersburg waterway was two yachts. She was actually looking at two lighthouses, but it took the rest of us a good half-hour to change Alison’s mind!

We dock in the Finnish capital of Helsinki, and drive out into the beautiful countryside for a genuine home-made lunch on a horse-farm. So don’t change channels … 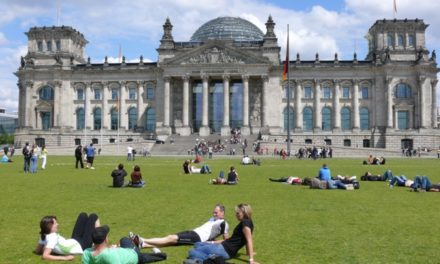