Just when we thought we’d seen the best the Baltic has to offer, we’ve been surprised and delighted by yet another highlight: the stunningly-preserved walled capital of Estonia!

Tallinn (according to websites I’d read) is widely rated as the most beautiful city in Northern Europe. Like many small nations in this region, tiny Estonia (pop 1.5 million) got unfairly pushed around (by the Germans, then the Russians) before gaining its freedom in the early 1990s.

For 700 years Tallinn guarded the Baltic (on behalf of its masters) from behind thick defensive walls – and, today, it’s one of Europe’s best-preserved cities: a medieval jewel that somehow avoided getting bombed-to-bits during WWII.

Our coach tour this morning took us into the city and around those old stone walls with their fairytale turrets – our cameras running hot with panoramic views of grandly-domed cathedrals and ancient spires jutting into the sky. Then we drove out around the attractive waterfront for coffee and pastries at a seaside eatery – plus another photo-stop at a the magnificent ruins of a 15th century convent.

By now it was obvious: Estonia’s ancient fort on the Gulf of Finland is loaded with atmosphere. Which is why, this afternoon, most of our mob went back for more – wandering the cobbled lanes and courtyards of the old city … sampling local lunchtime snacks … going to church (for a quick peep inside the impressive Russian Orthodox cathedral which overlooks the city) … and shopping for (even more!) souvenirs.

Our final port-of-call and sight-for-sore-eyes – Stockholm in Sweden. So stay tuned … 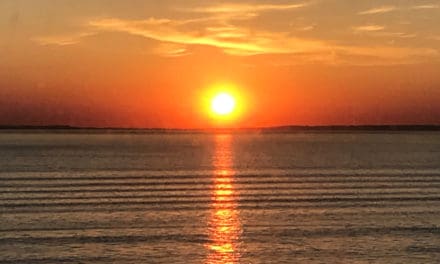