Cruising #2: On The River Rhone

(Apology: I have been trying for three days to upload this blog post with its pix – but weak internet reception on the ship and in the remote part of Provence where we’re now staying, has made that just about impossible. Sorry ‘bout dat, folks! John)

Today’s our last full day aboard the Amadeus Symphony, and we’re motoring northwards (upriver) on the Rhone, heading back towards Lyon. We had a three-course lunch a few hours ago. We’ve just been scoffing afternoon tea in the ship’s Panorama Bar: hot waffles, ice-cream, plus chocolate or red-cherry-sauce. And look, I’ve gotta tell you, this river-cruising is ohhh-sooo-luverly.

Try to picture us gliding almost silently along vast stretches of blue-green waterway … at times surrounded by dark wooded hills, at other times by late-summer fields of greens and yellows, and, more often than not, with vineyards carpeting the dusty slopes further back. Try to picture countless towns and villages slipping past … nice-on-the-eye in a French kind of way, mostly old-with-pockets-of-new, a required church-plus-steeple or bell-tower in the foreground, and bits of a ruined old castle blending into the hilly background.

Try to picture other shipping – an occasional barge or tanker, plus cruise ships of all shapes and sizes – passing us both ways on this busy channel … and the endless locks (30 or 40 of them on this cruise alone) that we’ve had to check in and out of as we’ve made our way upstream or down. And try to picture people waving at us from both banks … people walking their dogs, riding their bikes, fishing, tending their gardens, and just standing there … making us feel welcome. 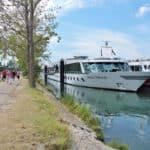 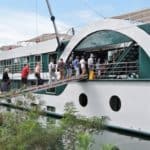 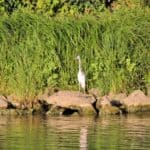 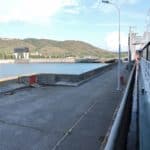 Last time we spoke, we’d just spent Saturday on the River Saone in the stunning Beaujolais Region. By Sunday, we were back in Lyon, then cruising south on the Rhone. And by Monday, we’d reached St Etienne des Sorts. From there, we drove out to a superbly-preserved Roman aqueduct – Pont du Gard – which, for more than 2000 years, supplied water to vast tracts of southern France. And we followed that up with a visit to a picturesque little medieval town – Uzes – famous for its fetching towers, tiled roofs and narrow lanes.

That same afternoon, we found ourselves in Avignon. This name may do nothing for you, but it reminded lots of us Kiwis of the folksong we learned in primary school – ‘Sur le pont d’Avignon’ – about the old stone bridge which spans the river. We saw that self-same bridge, ogled the city’s superbly preserved medieval walls and explored its majestic Palais des Papes (Palace of the Popes).

The ship was swept by toe-tapping hand-clapping ‘Gypsy Fever’ that night – in the form of a talented trio, two of whom were unbelievably fast on their Spanish guitars. 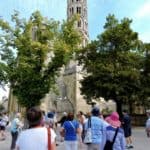 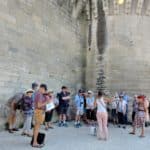 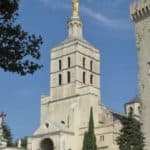 Tuesday’s sightseeing took us to the picturesque Camargue region (near the Mediterranean Coast), where nature seems to reign – including wild white horses, handsome fighting-bulls and beautiful pink flamingos. Then on to the medieval old town of Arles, that boasts a superb Roman arena plus a tonne of other old stuff. 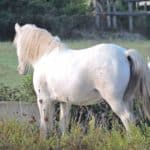 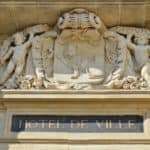 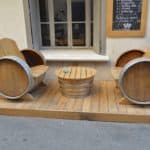 Which brings me to today, when we plunged ashore at the riverside town of Viviers, and enjoyed a countryside-drive through acre after acre of lavender bushes (past flowering, sadly) to one of France’s most spectacular geographical wonders: the Ardeche Gorge. Our coach followed the river as it winds its way through this stunning 30km canyon – carved by waterpower through limestone rock. One of several photo-op-stops was at the famous Pont d’Arc – an amazing natural stone bridge that spans the river. 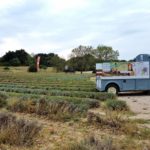 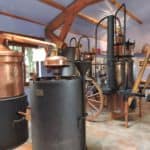 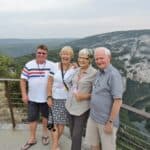 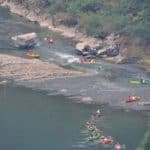 We rejoined the ship at Le Pouzin, and are now (as I’ve already hinted) eating our way back to Lyon. Tonight is the captain’s Gala Dinner, following which we will pack our bulging bags and snore the night away!

STILL TO COME: We say a sad “Au revoir!” to the Amadeus Symphony and travel by coach to … well … I’m not gonna tell you. See if you can guess? It’s where Van Gogh painted Starry Night, Nostradamus was born and Dr Albert Schweitzer was held prisoner. Watch this space for the answer …