Corfu – In The Greek Isles 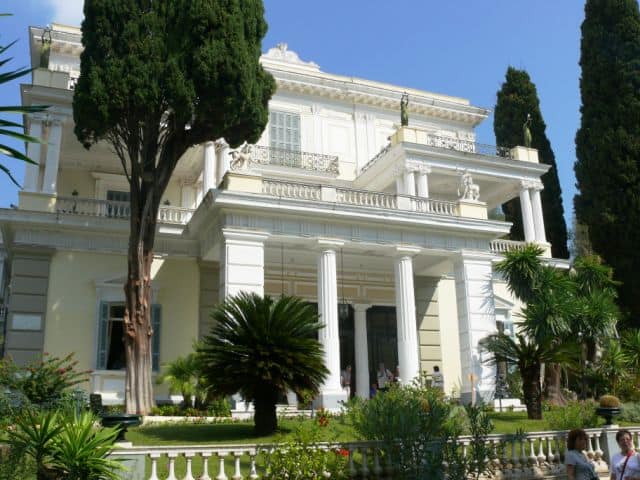 If you’re meticulously following our progress and have spotted what seems to be a two-day gap, give yourself a pat on the back and let me explain.

We woke this morning to find our ship navigating its way through the stunning Ionian Islands, in waters claimed by Greece. Popular Corfu, or Kérkyra in Greek, is where we finally docked (check the map) – a green and mountainous isle, much loved by the likes of Homer, Odysseus, Shakespeare and Milton.

We got to spend a full day in this gorgeous place, enjoying a scenic drive into the countryside for a nose-around the 100-year-old Achillion Palace, built by Empress Elizabeth (‘Sisi’) of Austria (who adorned the place with fabulous statues and mementos). Later, on our way to lunch, we passed through Corfu Town, eyeballing the Old Fortress and the elegant Palace of St George and St Michael – before stopping at a beautifully situated private villa – where we sat down to a generous Greek feast (including ouzo and wine) and some live toe-tapping music and folklore dancing. Yeehaa!

TOMORROW: A sight-for-sore-eyes awaits us – the magnificently-walled medieval town of Dubrovnik, a Mediterranean favourite with me and Mrs Cooney …

Cruising #2: On The River Rhone