There was a feeling of déjà vu the other morning as our cruise-ship tied up in Rotterdam. This was the third time we been in this busy port – and it was now our turn to bid “Tot ziens!” (“goodbye” in Dutch) to the ms Rotterdam and its friendly crew. With our hats on our heads and our bags under our arms, we climbed aboard a waiting coach and headed for the nearby city of Amsterdam (and hour-and-a-bit-away) and the Convent Hotel – our accommodation for the next two nights.

Our Mad Midlife Kiwis spent the afternoon exploring, then got together for a typically Dutch dinner at a downtown restaurant with the untypically un-Dutch name of Humphreys.

Amsterdam– built across 70 islands and connected by 1000 bridges – is renowned for its dykes, canals, bridges, houseboats, windmills, cheeses and bikes. (They don’t have car-parks – they have bike-parks!) And we spent the next day (Sunday) enjoying this remarkable city and its surrounds … watching clog-makers make clogs in 13th-century dyke-village of Zaanse Schans … watching cheese-makers make cheese (and gobbled up the samples) in knock-your-socks-off Edam, one of the best-preserved old villages on the former Zuiderzee … and watching windmills make wind (?) as we motored across the famous canal-laced polder landscape.

We lunched in the picture-perfect fishing villageof Volendam (that picture spoiled slightly by rain)… took a small-boat ride to another picture-perfect village, Marken … then drove back into the city for a leisurely canal-cruise aboard a glass-covered boat. We decided not to join the 2-3-hour-long queues into the World War 2 hiding-place (now a museum) of teenager Anne Frank (her oh-so-moving diary rates second-only to the Bible in print-numbers and translations). And we wrapped up the day with our final Farewell Dinner – at a Dutch/Indonesian restaurant.

All good things come to an end … and, sadly, our Grand Baltic Adventure was pretty much over. And if you’d been at the hotel the following morning (Monday) you would have seen our intrepid Kiwis hugging each other, farewelling each other, and heading in different directions – some to further travel in Europe or the UK, the rest of us to Singapore and (eventually) home.

Yes, I know. We say this at the end of every Midlife Madness adventure – but it’s true! We’ve had a BALL! We’ve seen so much, done so much, learned so much, gained so much and laughed so much that we don’t know where to put it all!

The show aint over till the fat lady sings – or, in this case, till the little yellow ducky quacks. And three more prizes were claimed in these final days:

The Pyjama-Party Award was won by Derek – who forgot to leave some clothes out of his main bag on the last night of the cruise. That bag was taken at midnight by the crew for disembarkation, and Derek arrived inAmsterdam with no socks on his feet and still wearing his nightshirt!

The Leave-The-Packing-To-The-Men Award was taken home by Bruce – who had the opposite problem. Having urged his wife, several times, to check all cupboard and drawers in their cabin and make sure everything was packed properly, Bruce discovered the following morning that he’d left three shirts still hanging in his wardrobe!

The Locked-Out-&-Homeless Award was won by Allan – who returned from a very-early-morning walk on the streets of Amsterdam to find the hotel front-door firmly locked. Unable to raise anyone, Allan had no option but to sit outside like a vagrant for a lengthy period of time, until staff arrived to let him in!

WANNA JOIN US ON OUR NEXT MAD MIDLIFE ADVENTURE? 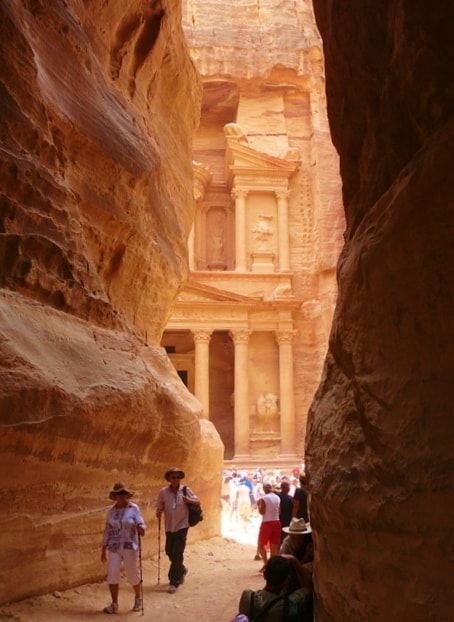 The Rose-Red City Of Petra