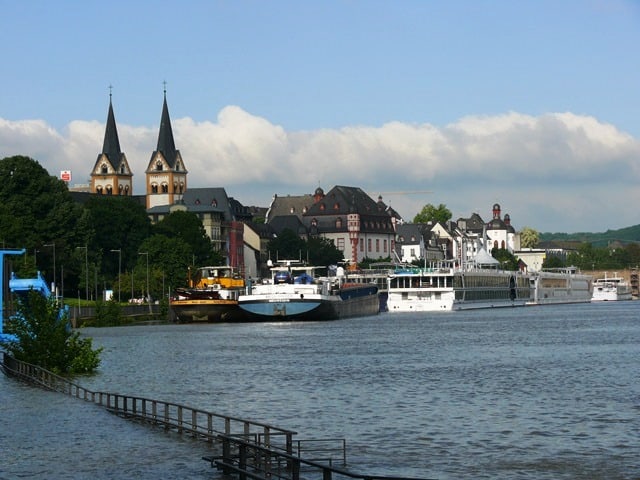 I don’t know if the rain in Spain fell mainly on the plain during the month of May. But I can tell you it fell heavily on the countries bordering the Rhine and Danube. And I can also tell you that, although today turned out to be hot and gorgeous, it was flippin’ cold to begin with – greeting us sightseeing Kiwis with a wind-chill factor that’s had us reaching for our balaclavas. (Or we would’ve, if we’d thought to bring them!)

Summertime in Germany is obviously unpredictable. But life aboard our luxury river-boat has thus-far been LUVERLY …

We spent the past two days gliding almost silently along vast stretches of green-grey waterway … surrounded both sides by forested woods and springtime greens … interrupted occasionally by small towns and industrial zones … with tankers, barges, container vessels and passenger ferries passing us (or being passed by us) as we cruised-on-by against the current.

At some point, the night before last, we crossed the border into Germany. And, early yesterday morning, we motored past the great industrial cities of Duisburg and Dusseldorf, docking around lunchtime in Cologne. This famous city, founded by the Romans, has long been an important trading centre – and is dominated by its vast Gothic Cathedral, started in 1248 as a pilgrimage church to house the relics of the three Magi. The two teetering spires (which weren’t completed until 1880) are 157 metres high, and several of us put our necks out trying to click the perfect shot!

In the evening, we continued upstream along the Rhine. And, after passing one-time-capital Bonn during the wee small hours, we arrived in Coblenz (where the Rhine and Moselle rivers merge). We went ashore this morning (in a gusty 7°) and explored this town’s romantic streets … its Old Quarter (badly damaged in WW2) … the Emperor Wilhelm Memorial … and the Schaengel Fountain.

However, some disappointing news was waiting for us back at the Amadeus Princess: due to all that May rain (which I referred to above), water-levels on both the Danube and the Rhine have risen so high that for us to proceed any further right now would be dangerous. The problem, you see, are the numerous old bridges, many of them medieval and built so low on the water that, when the rivers flood, vessels like ours simply can’t pass under them.

Anyway, for now, the authorities have closed both the Rhine and the Danube to all shipping – so we’re in limbo, playing wait-&-see!

What’ll we do tomorrow, the day after, later this week? Watch this space! But, in the meantime, there’s still plenty of fun to be had. We travelled by coach this afternoon through what is probably the most famous and most scenic stretch of the Rhine Valley, passing castle after hilltop castle … steep (almost vertical) terraced vineyards … attractive riverside villages … and ornate river-front mansions!

In another picturesque old town, Rudesheim, we rode the Winzerexpress (tourist-train) up to the Droggelgasse (centre of town) and spent a delightful couple of hours oggling its picture-postcard wine houses and garden taverns – and marvelling at the audio-ingenuity of long-gone centuries in a unique museum: Siegfried’s Mechanical Music Cabinet …

An excellent time was had by all? You betcha! And while our floating hotel isn’t going anywhere in the next day or so (at least), its gourmet restaurant and comfortable cabins still feel like home!

PEOPLE NEWS: Things have been a bit slow in the quacky-yellow-duck department, but another got claimed this afternoon:

TOMORROW: About half our group are taking another there-&-back coach-ride to Miltenberg and Wertheim – while the rest are gonna have a day off, wandering and shopping in the streets of Coblenz, and (maybe) riding a cable-car to a huge medieval hilltop fortress across the flooded Rhine. We’ll report back later …