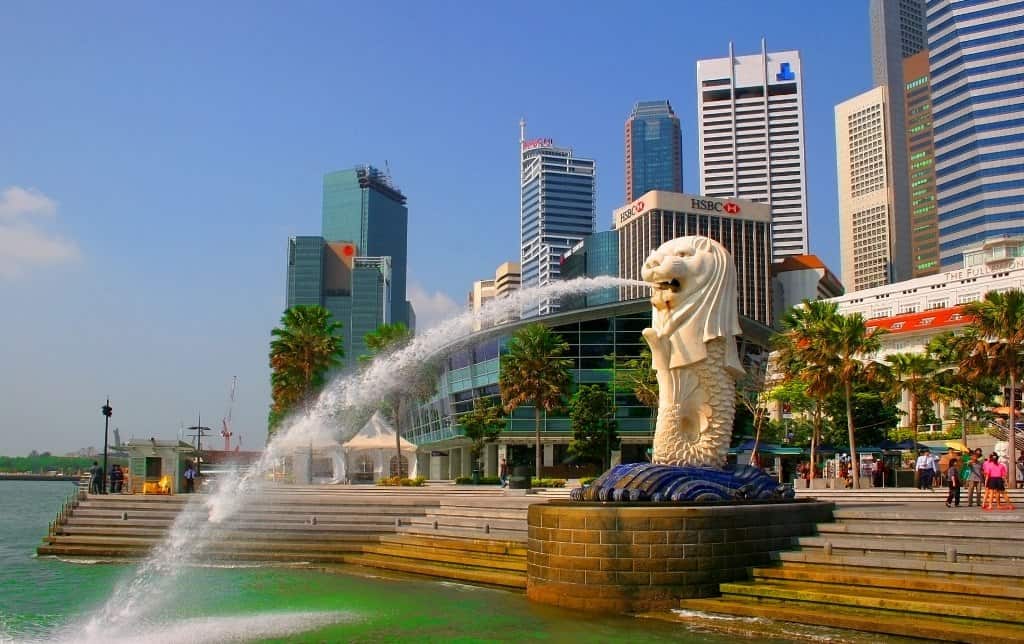 This post is coming to you from high-high-high in the sky-sky-sky somewhere north of Singapore. We left the vast, immaculate Changi Airport (they’re now building terminals #4 and #5) two hours ago, and are finally en route to India – YEEHAA! My wife is cuddled up beside me watching a movie, and our fellow Mad Midlifers are scattered around us in their seats on the lower deck of a big Airbus A380.

You may find this hard to believe but, thanks to the wonders of modern technology, I can apparently send and receive emails while we’re airborne – and load these words and photos onto our blog-site! Which I’m about to do … hopefully …*

We left Auckland only yesterday, touching down in Singapore 10 hours later. We then hitched a ride to the Grand Copthorne Waterfront Hotel – on the picturesque Singapore River, where you can find hotels, bright lights and eateries galore.

After being spoilt for choice at breakfast this morning, the 25 of us fanned out across this Asian showpiece-city ­– walking to colourful Chinatown, riding traditional bumboats along the river to Clarke Quay and Marina Bay, exploring the ultra-modern Gardens on the Bay, sampling a thirst-quenching Singapore Sling in the Long Bar at Raffles Hotel, getting high aboard the Singapore Flyer (a giant sightseeing ferris-wheel) and the Marina Bay Sands Hotel (three tower-blocks topped off with a ‘boat’), and cooling off in the Copthorne’s grand pool. (These aren’t my pix, I confess …)

This second leg of our exciting journey is taking us from Singapore (an island the size of Lake Taupo, and home to 5.5 million people) to Delhi – the world’s second most-populated city (after Tokyo) with a mere 16 million people (22 million, actually, in the Delhi Region)! Awaiting us there, and elsewhere throughout India, are a string of highlights which are bound to make you feel increasingly envious. Like what? Well, like these:

There! If that’s not enough to hold your attention for the next three weeks, I don’t know what will! Anyway, I’ve got to sign this off and put my laptop away. Two stunning, impossibly slim Singapore flight-attendants are coming down the aisle with the dinner-trolley, and I plan to taste-test my first Indian meal of this trip: Mitha Aloo Ki Chat (tossed sweet potato with chopped coriander) … followed by Saag Gosht, Bhendi Kadhi, Lyaz Pulao (Indian braised lamb in spinach, okra curry and onion rice) … along with Indian bread and Masala tea.

*CORRECTION: Guess what? It didn’t work – bummer! Despite the promising technology I was unable to get online while in middair. (So were two Aussie guys seated across the aisle, so it wasn’t just me.) Maybe one of the countries we were flying over wasn’t co-operating? Whatever, the flight-crew were apologetic. And I’m now posting this in Delhi.

Yes, folks, WE’RE HERE! We’ve landed in India. So those of you who worry about your loved ones’ flying-safety can stop worrying. And, trust me, I’ll have SOOOO much more to tell you when I next fire-up my laptop.

Leave a Reply to David and Marilyn Gordon Cancel reply