Exactly one week ago we waved goodbye to our mobile railroad home, the Royal Rajasthan on Wheels … took a bus to Delhi’s Indira Gandhi International Airport … and flew down the map to the greener, cleaner, more scenic state of Kerala in India’s south-western corner. Like New Zealand, Kerala is hailed as ‘God’s Own Country!’ It was once a supply centre on the ancient Spice Road used by Romans, Greeks, Arabs and sundry others. It has a population these days of 39 million souls (give or take a million or two). It is rated in the top three tourist destinations by the World Travel & Tourism Council – and it featured in National Geographic Traveller’s ‘50 greatest places of a lifetime’.

In short, our expectations were high – and we were not disappointed!

Accompanied by the delightful, intelligent, ever-helpful Vijesh (we called him VJ) we Kiwis enjoyed five quite different stopovers in this quite different corner of India – and I’m gonna attempt to cover the lot in this blog. So fasten your seatbelts, ladies and gentle persons …

A day or two later we toured a real live tea plantation, watched the precious leaves being processed (into black tea, green tea and most-expensive white tea), drank some of the tasty brew ourselves, and snapped our women (promptly nicknamed “The Tea Bags”) wearing the required face-masks and caps!

Remember our elephant-ride last week? Well, we enjoyed another one here in Periyar – a leisurely stroll atop half a dozen well-behaved jumbos, uplifted by the lush spice-forest below, and refreshed by the gentle breeze. Magic!

That same afternoon we bounced off on a three-hour jeep safari through the rich farmlands that lie just over the border – learning about various crops and fruits, and interacting with the toothless watchman in a local vineyard. Then, in the evening, we sat in a dimly lit theatre and watched a fiery demonstration of Kalaripayattu – the oldest and most scientific self-defence system in the world. 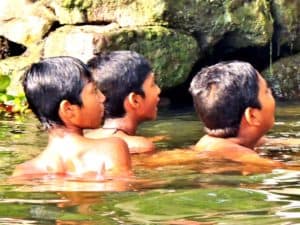 Our flotilla of houseboats came in different sizes, mostly three bedrooms with ensuites, and comfortably furnished with open lounges and dining areas. And our Mad Midlifers had more fun than they were legally entitled to!

I’m not sure I should tell you this, but we’ve been flat-out doing as little as possible – roaming the beach, watching local fishermen haul up their longboats, shopping in the town, getting oiled and greased and massaged in the  Ayurveda health spa, and cooling off in the lovely pool. (Temperatures here in the tropics have been in the very high 30s!)

Let’s face it: we’ve earned it, we’ve worked for it, and we feel a lot better for it! So eat your heart out!

PEOPLE NEWS: It’s never too late to earn one of our Yellow Quacky Ducks – and people are rushing to lodge their last-minute nominations:

FINAL BLOG: A wrap-up. A futile attempt to ‘summarise India’. And some hindsight-reflections about this truly remarkable tour.