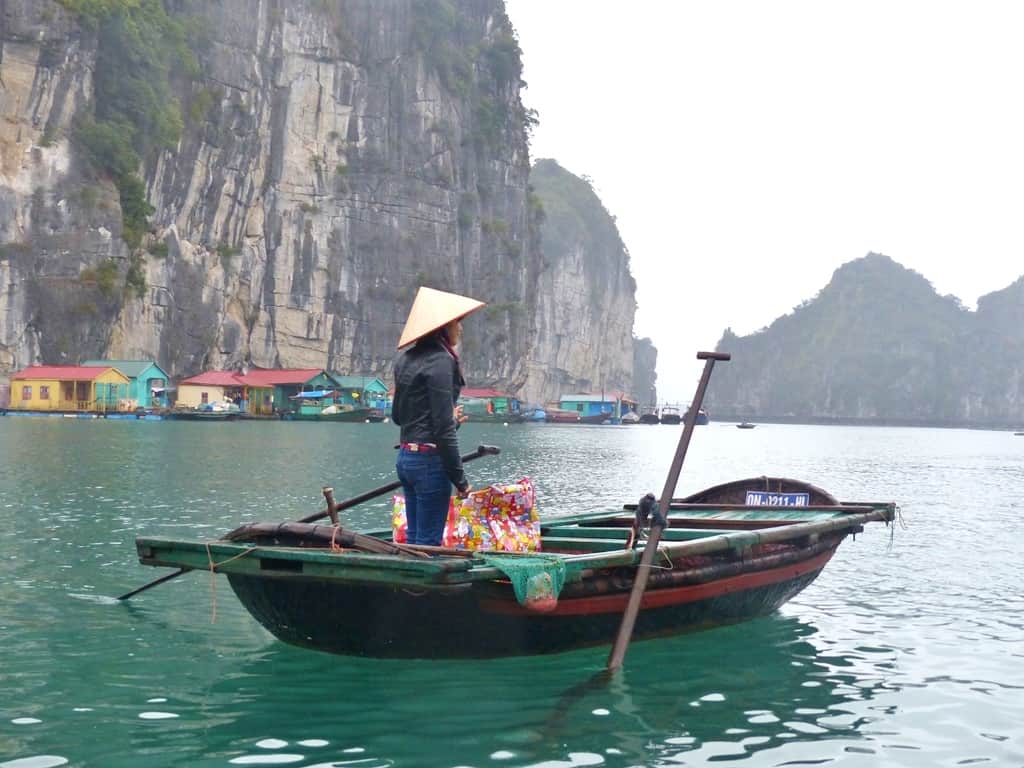 It’s Saturday night here in North Vietnam, and you’d never guess where this blog-posting’s coming from. We’re on a boat, but not just any old boat. We’re on an authentic Chinese junk in the middle of Halong Bay, an astonishing emerald-green seascape that’s three-and-a-half hours’ drive from Hanoi. Halong Bay, ‘the Land of 3000 Islands’, is one of the New World’s Seven Natural Wonders. And we’re overnighting here on the Bhaya Classic No.3.

It’s pitch dark outside, coolish on this vast expanse of water, but we’re not alone. We’re surrounded by other junks-cum-cruise-boats, large and small, anchored like we are amongst the jutting limestone rocks, and lit up like Christmas trees. ‘Jailhouse Rock’ is playing on one of them, the sounds reaching us easily. I’m sitting at a tiny wooden table on the tiny balcony that’s outside our cabin. As I peer at the screen and tap these words on my laptop, my wife is inside on the bed, enjoying a foot massage delivered by a very capable young Vietnamese.

It’s been misty and low-cloudy all day. The light rain that followed us from Hanoi seems to have stopped. And dinner will shortly be served in the dining room two decks up.

Is it magic? You bet it is! But this is the kind of experience we’ve come here for. And, so far, Vietnam has not disappointed us …

Our Thursday flight from Auckland to Singapore was uneventful. And our giant beds in the ultra-modern Crowne Plaza Changi Airport (connected by a walkway from Terminal 3) felt awfully good, I’ve gotta say. Then early yesterday morning we rode the Skytrain to Terminal 2, boarded another Singapore Airlines jet, and flew north to Vietnam’s cosmopolitan capital.

You could be forgiven if you’ve grown up not realising that Vietnam is “more than just a war”. The fact is, this modern get-up-and-go land of 90 million people (plus 35 million motorbikes!) is truly something else. And our re-education began almost as soon as we arrived. We ventured out through the drizzly rain to Hanoi’s Museum of Ethnology – where we viewed artefacts and costumes and model huts/houses from some of Vietnam’s 54 ethnic minorities.

This morning, after a Weight-Watcher’s breakfast in the Sheraton Hanoi Hotel, we said “Tam biet!” (goodbye) to the wet city and hit the road for 3½ hours. Our route took us through the rich farmlands of the Red River Delta … past scenes of rice paddies, water buffalos, crowded towns and everyday Vietnamese village life.

Arriving in the bayside resort town of Bai Chay – gateway to beautiful Halong Bay – we were welcomed onto this modified wooden-hulled junk (36 passengers in total) for a two-day cruise.

As we motored out through the amazing pointy limestone rocks, we made ourselves at home in our cabins … photographed passing islands and villages and boats of all shapes and sizes … downed a fresh-cooked lunch … and got ferried by coolie-hatted women (rowing small boats made of woven bamboo and tar) to the Vung Vieng floating village, home to 800 fishing families – before an onboard demo of traditional Hanoi cooking, followed by dinner and bed at our anchorage.

Tomorrow morning, our leisurely cruise through this immensely photographable region will continue – with some tai-chi out on deck before breakfast, and a shore-stop at Sung Sot Island, where we’ll witness some colourful limestone caves.

But you’ll be desperate to read this … so I’m signing-off for now.

TOMORROW: We return to Hanoi for a tour that includes a famous pagoda, an ancient temple, and a cyclo-ride through the city’s Old Quarter. So don’t hang up just yet …