When we left Hong Kong the other day and flew to the People’s Republic of China, we knew that China was big. Like VERY big. In fact, HUGE! Its history is huge … its landmass is huge … its population is huge … and most of its renowned attractions are huge. But, we chose to ignore all this hugeness and start SMALL! We took aim on GUILIN (pronounced Gway-leen) – a small city by Chinese standards of just 700,000 people, in the middle of the southern, semi-tropical province of Guangxi.

Why Guilin? Well, buried in abundant greenery … and shrouded in greyish mist … and surrounded by zillions of strange, pointy, weathered peaks … the place is simply GORGEOUS. Guilin was named after the fragrance of the osmanthus tree … its earliest recorded inhabitants lived in the Qin Dynasty (221-206 BC) … it is currently home to 12 ethnic minorities … and it’s no surprise that tourists in their droves have been beating a path to its door since China first opened its arms to the world.

The Emperor and a couple of concubines.

This handsome critter was about 10cms long!

Guided by the lovely Naomi, we began our Guilin tour by exploring a small cave filled with ancient Buddhist carvings … then clambering semi-energetically up Fubo Hill for a birds’-eye view of this riverside town (and a most-of-the-group photo) … then strolling through an astonishing bamboo factory where we discovered that, you-name-it, the Chinese are now making it out of bamboo-fibre and bamboo-charcoal. Following lunch, we went underground into Guilin’s Reed Flute Caves, famous for its stalagmites, stalactites and sculptures (created by nature over untold millennia, but colourfully back-lit by the Chinese much more recently) … and visited a hospital that specialises in Traditional Chinese Medicine, where we watched a couple of our men (think Guinea pigs!) get poked by acupuncture needles.

Last night we took to Guilin’s stunningly lit-up waterways – losing count of the bridges we floated under, ogling magnificent pagodas, and witnessing local cormorant fishermen as they put their faithful birds to work – before, finally, joining the happy crowds in Guilin’s town square and watching the Waterfall Hotel get its nightly drenching.

The Waterfall Hotel – zoom in to see why.

STILL TO COME: We’re off on a leisurely four-hour cruise down the Li River – passing photo-ops forever, boats galore, bamboo rafts, water buffaloes and those jutting, shark-tooth mountains – to the popular touristy town of Yangshuo. So don’t change channels … 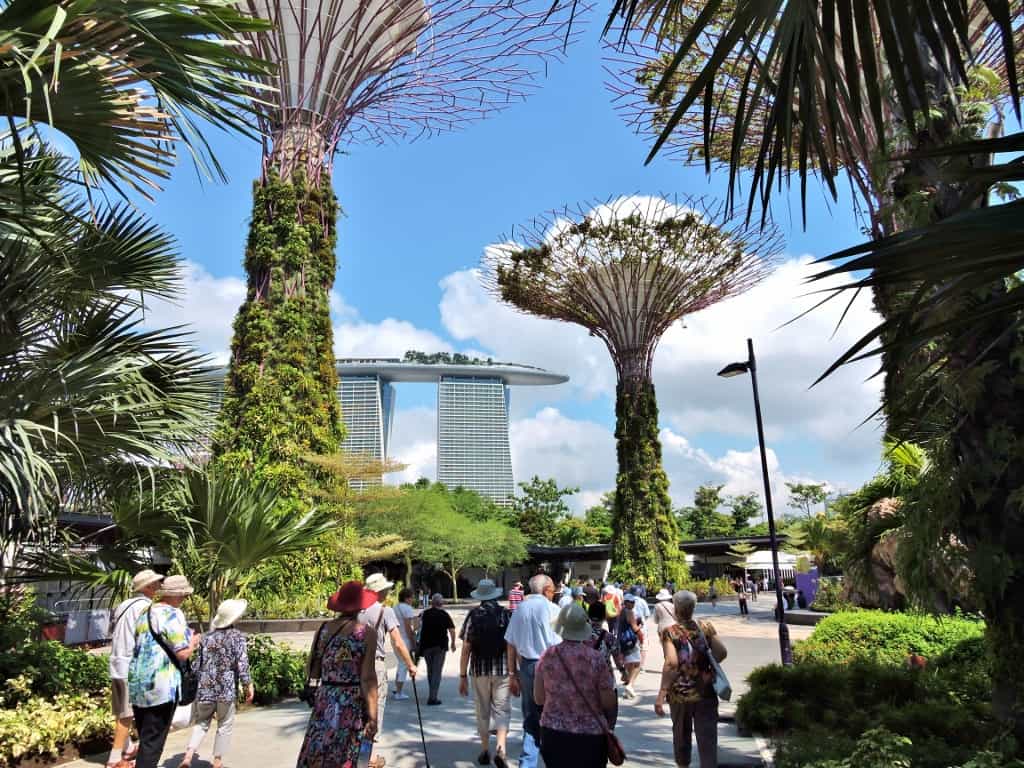