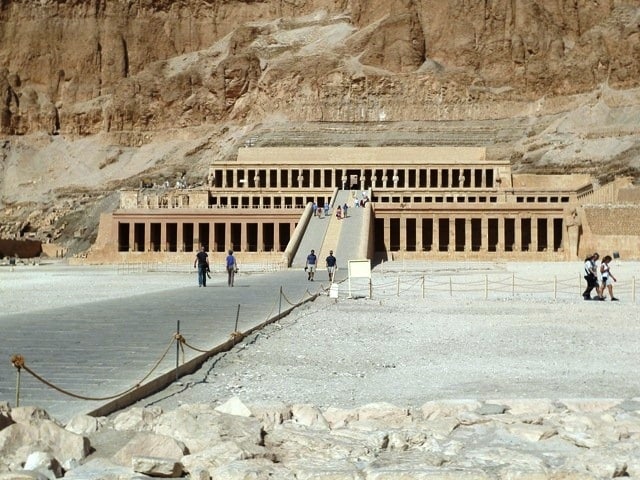 Imagine being pampered aboard a triple-decker, pool-topped cruise ship … riding silently on the wide, still waters of the Nile … with nothing to do but bask in the sun … interrupted only to be fed three times a day … while the peaceful shoreline slips past in slow motion.

Imagine fields of maize and sugarcane, date and banana palms – vivid-green against a backdrop of harsh brown desert. Imagine minarets (mosque-towers) rising high above the treeline in even the smallest, dustiest village … and the sound of muezzin (Muslim criers) calling the faithful to worship.

Imagine a thousand scenes ever-changing – and yet unchanged in thousands of years. Imagine small boys in rickety rowboats throwing fishing nets and smacking the water with sticks to scare up a meal … women at the water’s edge washing robes and shirts and pots while their kids splash each other and shout “hello” to the passing tourists … sun-blackened men ploughing the rich soil with tired plodding water-buffalos.

Well, we Kiwis don’t have to imagine it anymore, because this is exactly what we’ve been DOING for the past three days! And it’s been every bit as “pinch-me-please-this-can’t-be-happening” magical as it sounds.

ON SATURDAY …While we ate a royal shipboard breakfast, the Tamr Henna cast off and motored gently out into the current. Our route took us downstream (northward – see map), and our first stop-off  was the shoreside town of Kom Ombo, where we visit a temple (332 BC) dedicated to Sobek, the Crocodile God.

(Note: Since arriving in Egypt we Kiwis have had a crash-course on the Nile and its gods, and will probably lecture you on the subject when we get home. For your interest, the river goes back a long way – into central Africa (winding its way north through Uganda, Ethiopia and Sudan) and into ancient history. Thousands of years ago, the Egyptians depended hugely on the Nile’s annual floods. Those floods brought down silt by the sack-full and spread it along the riverbank in thin fertile strips. If the Nile failed, Egypt starved. Not surprising, therefore, that the bewildering array of Egyptian deities were linked to these watery cycles. And not surprising that the pharaohs chose the banks of the Nile to build their stunning monuments. Anyway, I’m not gonna tell you any more. I’ve got places to go and people to see. But you can meet some of these gods yourself – like Osiris, Isis, Seth and Horus – by reading Wilbur Smith’s novel, River God, and its sequel The Seventh Scroll.)

Following lunch back on the ship, we did some Mad-Midlife relaxing in top-deck sun-chairs and splashed around in the cool, cool pool while the Tamr Henna continued its downstream cruise to Edfu and the beautifully preserved Temple of Horus, the Falcon God. Thanks to the dry heat (plus the fact that most of them spent centuries buried deep beneath the sand) these 2500-to-3500-year-old temples are remarkably well-preserved … and their huge scale, looming statues and stunning reliefs (hieroglyphics, cartouches, wall-carvings, and faded-but-still-glorious colours) must be seen to be believed.

That afternoon, for something a little different, we travelled to this temple via a hair-raising horse’n’cart ride … careening through the streets of Edfu accompanied by much shouting (by the drivers) and shrieking (by us)!

Then, at night (while the shippassed through the lock at Esna and continued on to Luxor), we dressed up as pharaohs, queens, priests, whatever (robes and togas, beads and head-towels) and enjoyed an Egyptian Galabea Party. Yeehaa!

ON SUNDAY …With the Tamr Henna moored in the big, busy city of Luxor, we got up before the sun, crossed to the Nile’s West Bank,and drove out through arid mountains to the renowned Valley of the Kings, where some 63 Pharaohs of Egypt – including the young and mysterious Tutankhamen – were buried (up to 1500 years before Christ) in elaborate tombs. We also visited the eye-catching Temple of Hatshepsut (the only female pharaoh), blending dramatically into the sun-baked cliff-face … had a photo-stop at the Colossi of Memnon (all that’s left of the Funerary Temple of Pharaoh Amenphis III) … and enjoyed a fascinating papyrus-making demo at a local factory.

Then, after another weight-watcher’s lunch back on the ship, we were up-up-and-away again – to the fabulous temple complexes at Karnak. Construction started here some 4000 years ago, was spread over 1300 years, was undertaken by a succession of big-name pharaohs (including Ramses 11), and resulted in the world’s largest religious complex (St Peter’s, Milan and Notre Dame Cathedrals could all be lost within its walls).

We’ve seen more than our fair share of temples these past three weeks, but this one – the granddaddy of ‘em all – simply knocked our socks off. Its three main temples (dedicated to the gods Mut, Montu and Amun), are enclosed in enormous brick walls, and set among avenues of sphinxes and halls of gigantic columns.

More than a few of us went back to the Tamr Henna with stiff necks, from all the looking up-up-up!

ON MONDAY … (that’s today) We packed our bags, vacuumed our cabins, ate our final Nile-cruise breakfast, said “Maa al lama!” (goodbye) to the ship‘s friendly crew, and relocated to Luxor’s lovely modern airport – where we had to fight off hordes of would-be porters, intent on taking our bags and scoring a fat tip.

And that’s where I am right now … sitting with my beloved … and writing all this nonsense for you lucky people. Our group flew out to Cairo a couple of hours ago without us. There was a small hiccup, you see: the plane was overbooked, and they couldn’t take all 49 of us, so me and she elected to stay back. But our (later) flight has now been called – so I’m signing off.

We’ve been too busy these past few days to hand out yellow ducks, so time for a catch-up:

Our Mad Midlifers experience a close-up encounter with one of the Seven Wonders of the Ancient World: Egypt’s massive Pyramids and their ever-watchful Sphinx.