You probably think we’re swanning around on holiday over here in Africa – right? Well, think again! This is work … hard work! I’m talking early mornings … fast-paced days … tiring drives … and never a dull moment. Plus, each night over dinner, we’ve got to listen in to the latest America’s Cup racing. It’s tough, I tell you. And I’m having great difficulty finding time to squeeze out more blog posts.

Anyway, enough complaining. Here, for your enjoyment, is another belated update about where we’ve got to on our wild Mad Midlife Safari … plus more selected images of Africa and the amazing wildlife we’ve been privileged to meet.

We celebrated our second day in the Masai Mara wildlife reserve by going airborne in a hot-air balloon … taking off just before sunrise … enjoying magnificent views of antelopes, buffalos, elephants and giraffes from way-up-high … then landing in the open grasslands for a classy champagne breakfast. 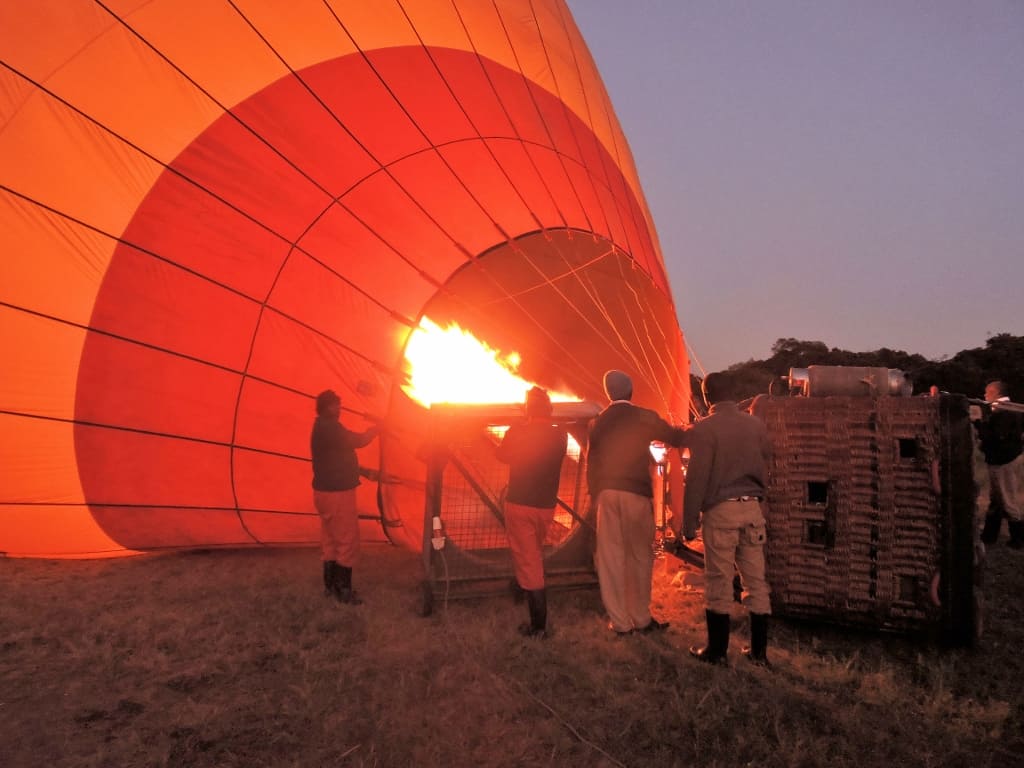 Today, after crossing the Kenya-Tanzania border at Isebania, we enjoyed a two-night taste of Africa in the old tradition – at Kirawira: another luxury tented campsite, this time perched on a hill with uninterrupted views of the Western Serengeti Plains.

The Serengeti, with its wide open spaces, is the most famous wildlife sanctuary in the world. The lush vegetation around Kirawira is home to heaps of animals and abundant birdlife. And we drifted off to sleep each evening with the night-time grunting of wildebeest and yipping of zebras that were gathering in their countless thousands on the sunburnt vastness below us, preparing for their annual migration. When the rains start in Kenya, they will stream northward – obeying an instinct so strong that no drought, gorge, charging lion or crocodile-infested river can hold them back.

The Serengeti is everyone’s dream of Africa … and one of the last places on earth where the Big Five is out in force, and such large numbers of animals can still be seen at-home in their natural habitat.

Last night we slept in individual thatched ‘rondavels’ (domed huts) – another true ‘out of Africa’ experience we’re unlikely to forget in a hurry, thanks in no small measure to visitors the resort had throughout the evening: zebras stealing a drink from the swimming pool, and several large, aggressive cape buffalos making a nuisance of themselves right outside our huts! (As has happened already on previous nights, we needed armed escorts with powerful torches to accompany us to and from our rooms. Exciting …)

We arrived here late this afternoon, after a lengthy, bouncy, dusty, teeth-rattling romp across the endless Serengeti. Our lodge-for-two-nights is clad in river-boulders, cloaked in creepers, and set high up on the rim of the world’s largest intact volcanic caldera: the spectacular Ngorongoro Crater, identified as a World Heritage Site, and rated the Eighth Wonder of the Natural World.

Bright and early tomorrow morning, we’re going down onto the crater floor to meet some of the thousands of animals, large and small, that have made themselves at home in this remarkable location. Tell you more soon.

Back in the Ol Pejeta Conservancy, we were shown around a CHIMPANZEES sanctuary – for orphaned or abandoned chimps.

A mid-sized antelope, the HARTEBEEST has a long narrow face and horns that look like a TV antenna.

This little BLACK-BACKED JACKAL was foraging in the long grass, and seemed a bit camera-shy.

This colourful HADEDA IBIS was one of numerous birds we spotted along the shores of Lake Naivasha.

This colourful AGAMA LIZARD (about 30 cm long) was sunning itself on a rock near one of our toilet-stops.

Our eagle-eyed driver spotted this handsome CARACAL too far away from a decent photo, but we had to try.

These large, robust WATERBUCKS with shaggy coats and striking horns have turned up all over the place.

Yet another large-ish antelope with strange blue markings, this TOPI male was taking a break after hours on sentry-duty

No doubt about it, PINK FLAMINGOS, like these we saw on Lake Nakuru, are real eye-catchers.

We caught this very large CROCODILE warming up on the banks of the Mara River. Shame it wouldn’t turn and face us.

You run into some pretty weird wildlife out there on those game-reserves!

Here they are, the WILDEBEEST – not the prettiest animal we’ve encountered, but a much-loved lunch for lions and hyenas.

We’ve already seen lots of weaver-birds, but this little SPEKE’S WEAVER deserved a shot, I reckon.

Too far away for a good photo, this CHEETAH was just a tiny upright blob – until enlarged by our zoom-lens.

Sunrise over the Masai Mara – as seen from our hot-air balloon!

COMING UP: We meet the Big Cats, in a very big and exciting way! You won’t want to miss this …